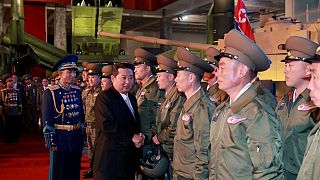 This is the world's first and only lava show

In an apparent continued effort to drive a wedge between Washington and Seoul, Kim also used his speech at a rare exhibition of weapons systems Monday to stress that his military might isn’t targeted at South Korea and that there shouldn’t be another war pitting Korean people against each other.

Calling the United States a “source” of instability on the Korean Peninsula, Kim said his country’s most important objective is possessing an “invincible military capability” that no one can dare challenge.

The exhibition, which KCNA says was meant to mark the 76th birthday of the ruling Workers’ Party on Sunday, was the first of its kind since Kim took power in late 2011, according to Seoul officials.

KRT images showed Kim, clad in a dark suit, walking on a red carpet lined with big missiles mounted on trucks, passing by a multiple rocket launch system and watching jets flying in a formation.

Yang Wook, a military expert who teaches at South Korea’s Hannam University, said the weapons include what appears to be a new ICBM that North Korea disclosed during a military parade last year but hasn’t test-fired, Yang said. That missile mounted on an 11-axel launch vehicle during the parade is considered to be the North’s biggest-yet ICBM.

Other weapons on display were another ICBM that North Korea tested in 2017; ballistic missiles that can be fired from submarines or a train; solid-fueled, short-range missiles; and a developmental hypersonic missile that had its first test-flight last month, said Lee Choon Geun, a missile expert at South Korea’s Science and Technology Policy Institute.