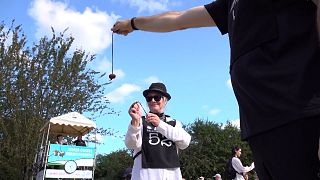 Like many sporting traditions last year's Championships were cancelled due to the pandemic.

The championships was originally started by a group of local fishermen after a planned angling match on the near-by river was sunk by bad weather.

The game involves swinging a conker threaded on the end of a string at an opponent's conker with the aim of smashing it - the loser is the one whose conker shatters first.

Each player takes three (3) alternate strikes at the opponent's conker. If a player causes a knot of the laces (a snag) this is noted, three snags will lead to disqualification.

If the game lasts for more than five minutes, play will be halted and the 5- minute "rule" comes into effect. Each player is allowed up to nine further strikes. If the game is still going after nine strikes then the winner is the one who has hit the nut the most times.

In the men's final, it was local lad Ady Hurrell from Whittlesey near Peterborough who came out on top beating Danny Leslie, and in the women's final defending champion Jasmine Tetley from Nottingham retained her title.