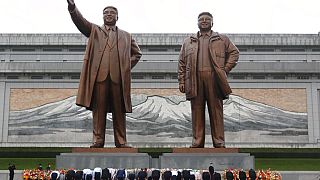 North Korea marked the 76th anniversary of its ruling Workers' Party of Korea on Sunday.

North Korea marked the 76th anniversary of its ruling Workers' Party of Korea on Sunday.

The capital city Pyongyang was decorated with flags and placards with the Workers' Party emblem of a hammer, sickle, and brush.

Under light rain in the morning, citizens went through the routine of showing respect to the country's former leaders Kim Il Sung and Kim Jong Il, which is a requirement on all major holidays and anniversaries.

When asked about the anniversary, as usual North Koreans must express themselves very carefully, because public expression of opinion normally follows official positions.

Last year, North Korea staged a large parade with military equipment and a speech from leader Kim Jong Un, to mark the 75th anniversary of its Workers' Party of Korea.

This year, up until Sunday afternoon, there was no report of any significant events to mark this 76th Workers' Party anniversary, but that could still come out from state media – North Korea often reports news hours or sometimes days after an event happens.