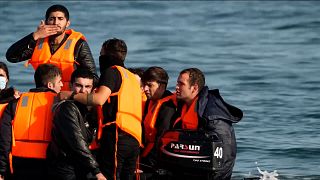 A group of French police officers watched dozens of migrants boarding a dinghy on Friday to get across the Channel to Britain, footage by British broadcaster Sky showed.

This time, however, unlike in most similar attempts which take place in the dead of night, the crossing happened in stark daylight.

The migrants, who were said to be Iraqi Kurds, first carried a large dinghy into the sea before boarding it, while eight French police officers watched on from the beach near the village of Ambleteuse in northern France, Sky reported.

Alongside passers-by Sky's team witnessed the migrants, of which there were approximately 40 including three small children, making the desperate attempt to get to the UK.

Sky reported that eight French police officers with riot shields and helmets were watching from about a 100 metres away but did not get involved. They later told Sky the reason they've not reacted was that they were outnumbered.

About half an earlier, a boat carrying more migrants left the same beach under the watch of the police.

One man told Sky that he had paid £2,000 (2,722 US dollars) to travel to get to the EU through Belarus, passing through Poland and Germany to get to France.

Other boats were also spotted in the sea, including a 200 euro (231 US dollars) canoe which was being steered by men who said they were from Sudan.

They were not even wearing life jackets, making their journey even more dangerous.

The French coastguard told Sky News that multiple operations to rescue the migrants were taking place along the French coastline and that there were at least 20 boats attempting to cross the Channel on Friday.