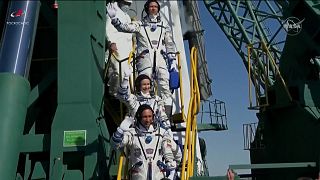 Peresild and Klimenko are to film segments of a new film called "Challenge," in which a surgeon played by Peresild rushes to the space station to save a crew member who is suffering from a heart condition.

Dmitry Rogozin, head of Russia's state space corporation Roscosmos, has been a leading proponent of the project, which he has described as an opportunity to enhance the nation's space glory and has rejected criticism from some Russian media.

Some commentators have argued that the film project would distract the Russian crew and that filming on the Russian segment of the International Space Station, which is considerably less spacious than the U.S. segment, could be awkward.

A new Russian laboratory module, Nauka, was added in July, but it is not yet fully integrated into the station.

Novitskiy, who will play the sick cosmonaut in the film, will take the captain's seat in a Soyuz capsule to return the crew to Earth on October 17.