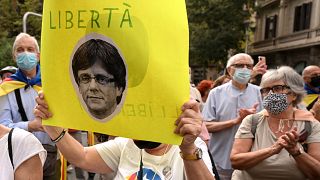 Puigdemont, who fled Spain after a failed secession bid for the northeastern region in 2017, was detained in Sardinia, his lawyer said, an Italian island with strong Catalan cultural roots and its own independence movement.

Puigdemont is expected to appear at an extradition hearing.

Any decision by the judge in the Sardinian city of Sassari in favor of extradition would ultimately have to be approved by the Italian justice minister in Rome.

Protestors gathered outside the Sassari court of appeals to demand the release of former Catalan leader Carles Puigdemont.

Holding Sardinian and Catalan flags, the group were united in voice chanting "freedom."

Italian police transferred Carles Puigdemont to a jail in Sassari, a Sardinian city near Alghero, where he had been detained upon arrival at the airport there. Alghero is hosting a traditional Catalan folklore festival that he was expected to attend.

Earlier in the week, Sardinian media reported that Puigdemont had been invited to a closed-door gathering elsewhere on the island of sympathizers of a Sardinian independence movement. Sardinian separatist supporters holding flags and banners gathered outside the courthouse to show solidarity as they waited for Puigdemont's arrival at the tribunal.