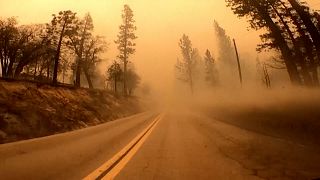 Hundreds of firefighters are battling the Windy Fire to protect several groves of giant sequoias in the United States.

A number of separate fires were converging on the California woodland that is home to the huge trees.

Giant sequoias and their relatives, the California redwoods, are adapted to fires and typically endure lots of fires in their lifetime, the heat from which helps their cones to open, allowing the seeds to disperse.

But longer, hotter and more aggressive fires can damage them, sometimes irreparably, and California has recently seen multiple severe fire seasons in a row.

Rising temperatures and increased dryness due to changing rainfall patterns thanks to climate change create the ideal conditions for forest fires.

The World Meteorological Organization said that the five-year period to 2019 was "unprecedented" for fires, especially in Europe and North America.