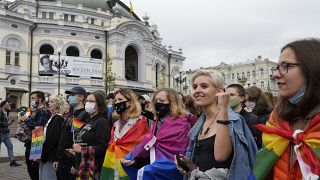 Thousands of people gathered in the Ukrainian capital Kyiv to take part in the annual Pride march in support of the country's LGBTQ community. Around 7,000 people wearing colourful outfits and waving rainbow flags marched down the streets, some carrying banners reading "Straight Against Hate". Participants put forward eight demands to Ukrainian authorities, including the legalization of civil partnerships for LGBT people and further laws against LGBT hate crimes.

The march was guarded by police, who sought to prevent clashes with far-right groups that attempt to disrupt the event every year. Several hundred activists opposing the march held their own rally in a park in Kyiv. No clashes were reported.

Hundreds of revellers in Serbia gathered for the annual Belgrade Pride parade under heavy police presence. Police cordoned off downtown Belgrade as LGBT activists marched through the streets carrying rainbow flags amid a simultaneous rally against COVID-19 containment measures.

It was the 20th anniversary of the first Belgrade Pride march, and organiser Marko Mihajlovic said that although the situation for the LBGT community had improved over that time, more still needed to be done.