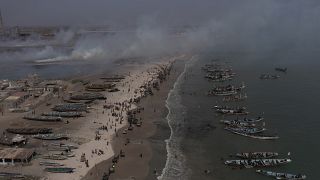 Armed with rakes, sacks and gloves, volunteers cleaned up trash littering a beach on Senegal's usually pristine coastline. Dozens of mainly young people and even children picked up garbage from the sandy beach in Bargny, a city located 35km from the capital Dakar. They were answering a call made by environmental activist "Medza", to participate in World Cleanup Day.

Medza is a hip hop artist who, years ago, decided to take action over the environment, along with a group of volunteers.

"Bargny is an ecological bomb," he said while standing next to a pile of rubble and trash on the shores of his hometown.

For about 10 years, he and his group, called Crac Team Medza, were not just cleaning the beach - and sometimes even the streets - but also giving workshops and talks to residents and local school students, in an attempt to create awareness about the environment.

Medza said the lack of public participation and also the lack of policies and actions from the authorities, had left Bargny and other places in a very difficult situation.

He cited pollution from industries, bad waste management, and the lack of a proper sewage system that forces people to throw the rubbish and dirty water in inappropriate areas.

But while protecting the environment has been challenging, Medza knows his work is slowly taking effect, when he sees young people and dozens of children responding to his appeal to clean up the beach.

Along with Senegal, 179 other countries participated in World Cleanup Day, according to advocates of the event.