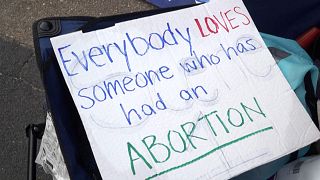 Dozens of protesters in favour of abortion rights gather outside the house of Supreme Court Justice Brett Kavanaugh in Chevy Chase, Maryland, to protest his decision, along with four other justices, not to stop Texas' abortion ban, which took effect on September 1 and prohibits abortions after six weeks of pregnancy.

Hundreds of anti-abortion demonstrators protested on Monday outside Mexico's Supreme Court while justices continued a weeks-long debate on abortion rights.

Judges were debating the possibility of medical personal objecting to performing legal abortion or family planning procedures, but the vote was suspended until next week.

The debate follows a Supreme Court decision last week which ruled it was unconstitutional to punish abortion.