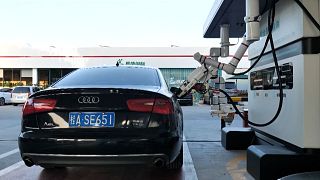 At one gas station in the Guangxi Zhuang Autonomous Region, a robotic arm equipped with sensors extends out from a regular petrol pump. The robot first receives an order from a customer via an app. It can then open the car's fuel tank, unscrew the cap, and direct a fuel nozzle towards the open tank. After refueling the vehicle, the robot tightens the cap, closes the door, and returns to its initial position. The whole process takes 180 seconds, similar to the amount of time it takes a human worker to do the same job.

The robot was developed by Sinopec, one of China's major oil and gas producers. It consists of four parts: a robotic arm, a cognitive system, a fuel nozzle and other refueling accessories, and a control system.

The robot also uses obstacle avoidance technologies so it can avoid bumping into pedestrians and vehicles during its service.

According to Sinopec, the robot will be used in over 30,000 gas stations across the country.