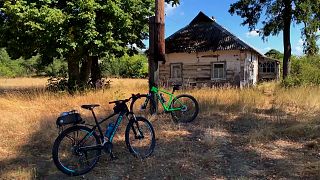 The Exclusion Zone, which covers over 30 kilometres of land, is still dotted with unnerving nuclear warning notices.

It's a sign that 35 years after an explosion ripped through the Chernobyl Nuclear Power Plant, the area is still considered dangerous.

But it attracts many tourists, and numbers increased significantly between 2018 and 2019, thanks to the popular HBO mini-series 'Chernobyl.'

According to the body which governs the Exclusion Zone, pre-pandemic figures were promising - in 2019 123,403 people visited the zone. Trips are only possible through a certified guide. As they finish their tour, the cyclists are checked for radiation levels before they leave the zone.

On April 26, Ukraine marked the 35th anniversary of the 1986 disaster and the government is preparing to apply for Chernobyl to be a designated UNESCO World Heritage site.