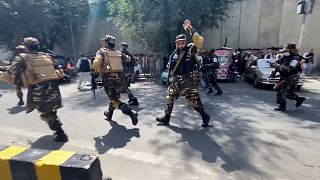 Scores of protesters, many of them women, took to the streets of Kabul on Tuesday, September 7, chanting in support of the country’s opposition group resisting the Taliban and against neighbouring Pakistan.

The protest came a day after Ahmad Massoud, son of the iconic Ahmad Shah Massoud, a slain anti-Soviet and anti-Taliban guerrilla fighter who became the national hero of Afghanistan, called on the nation to “rise up” and “resist” Taliban in any way they can.

Massoud, who is leading anti-Taliban forces in the Panjshir Valley, the last holdout against the Taliban, said his National Resistance Front of Afghanistan (NRF) will stand with the nation “until reaching freedom for Afghanistan”.

Protesters also chanted against Pakistan and the alleged close ties of the country’s Inter-Services Intelligence agency with the Taliban.

A recent surprise visit by the head of Pakistan’s Inter-Services Intelligence agency General Faiez Hameed to Kabul has stirred controversies in Afghanistan.

Many protesters said the Pakistani military was directly involved with the ongoing military operation against the resistance front in Panjshir Valley.

According to Euronews correspondent in Kabul, Taliban forces had fired warning shots to disperse the crowd.

Meanwhile on Monday, Taliban spokesman Zabihullah Mujahid issued a statement saying Panjshir was under the full control of the Taliban.

The National Resistance Front of Afghanistan (NRF) said Taliban’s claim was “false” and the fighting in the valley was still going on.

The Panjshir Valley, a natural fortress surrounded by the Hindu Kush mountains north of Kabul, has for decades been a bastion of resistance against Soviets and the Taliban.