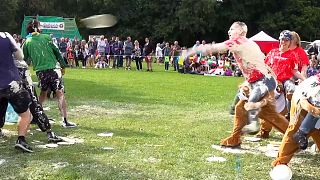 The rules for this are as follows: Teams are made up of four people each wearing fancy dress. They stand behind a table and throw five pies with their left hand at their opponents who are eight feet away.

As for the scoring, a direct hit in the face is 6 points, 3 points on the arm or above shoulders and 1 point for any other part of the body and if you miss two successive throws a point is deducted! And, as with many other sporting competitions, the judge's decision is final.

Real custard is not used as they don't want to be seen as wasting food, so its just flour mixed with water.

21 teams took part this year, all from the UK this year largely due to the Pandemic as foreign teams could not travel.

Bouts or heats lasted anywhere from 15 seconds to 30 seconds.

Among those taking part were teams with names such as 'Pie Hard', Shepherds Pies' and 'Pie Face'.

Teams battled it out in a knock out style event, culminating in one team being crowned world champions.

The history of the World Custard Pie Throwing Championship leads back to June 1967, when the event was conceived. This tradition came to an end in 1987 when the trophy was lost and never found.

This year's championships was won by 'EF Girls' who overwhelmed and beat 'Epic Dodgers' in the final with a score of 47 to 27.