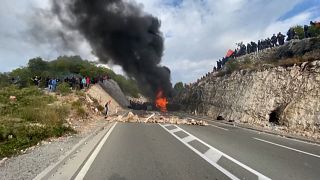 Riot police used tear gas on protesters who fired gunshots in the air and hurled bottles and stones early Sunday in Montenegro before a planned inauguration of the new head of the Serbian Orthodox Church in the country.

The demonstrators set fire to car tyres at a road blockade outside Cetinje set up to prevent church and state dignitaries from coming to the ceremony.

Chanting “This is Not Serbia!” and “This is Montenegro!,” many of the protesters spent the night at the barriers amid reports that police were sending reinforcements to break through.

The inauguration scheduled in Cetinje, a former capital of the small Balkan nation, has angered opponents of the Serbian church in Montenegro, which declared independence from neighboring Serbia in 2006.

On Saturday, hundreds of protesters confronted police in Cetinje around a monastery where the inauguration of Metropolitan Joanikije is supposed to take place.

The situation flared up in Cetinje early Sunday after a relatively calm night that followed Saturday’s clashes and a parallel gathering in the capital, Podgorica, where thousands of people greeted Serbian Patriarch Porfirije and Metropolitan Joanikije before the planned inauguration.

Montenegrins remain deeply divided over their country’s ties with neighboring Serbia and the Serbian Orthodox Church, which is the nation’s dominant religious institution.

Around 30% of Montenegro’s 620,000 people consider themselves Serb.