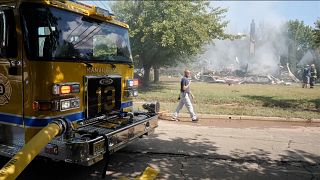 It caused significant damage to homes, businesses and vehicles.

One after another, storm evacuees like Flor and Shah in Manville, a central New Jersey town along the rain-swollen Raritan River, told the same story: an urgent late-night knock on the door, a wall of water crashing into their apartments, being rescued by boat and taken to higher ground.

At least 25 people died in New Jersey alone, most from drowning.

Manville, which lies along the Raritan River, is almost always hard-hit by major storms; it was the scene of catastrophic flooding in 1998 as the remnants of Tropical Storm Floyd swept over New Jersey.

It also sustained serious flooding during the aftermath of Hurricane Irene in 2011 and Superstorm Sandy in 2012.