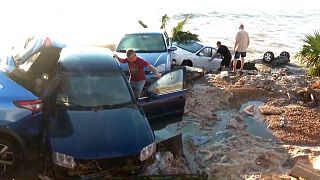 Flash floods swept cars down streets in a seaside town in northeastern Spain on Wednesday as other parts of the country were hit by overnight storms.

A downpour quickly overwhelmed the Catalan town of Alcanar, where waters brown with soil swept up cars and sent them hurtling down streets toward the Mediterranean.

Most of mainland Spain is under alert for heavy rains.

Madrid and other areas of central Spain saw heavy rains and mild flooding during the night caused by storms that produced over 9,000 lighting strikes.

There were no immediate reports of casualties.