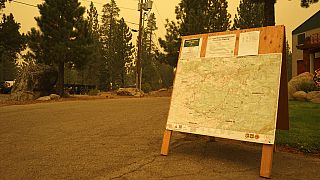 A ferocious wildfire approached Lake Tahoe just hours after roads were clogged with fleeing cars when the entire California resort city of South Lake Tahoe was ordered to evacuate and communities just across the state line in Nevada were warned to get ready to leave.

The popular vacation haven normally filled with tens of thousands of summer tourists was emptied out Monday as the massive Caldor Fire expanded to the north and south.

As flames churned toward South Lake Tahoe, residents just over the state line in Douglas County, Nevada were under evacuation warnings.

The threat of fire is so widespread that the U.S. Forest Service announced Monday that all national forests in California would be closed until Sept. 17.