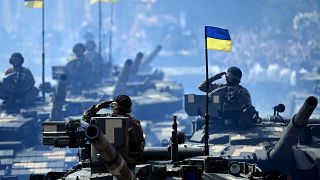 Ukraine didn't officially become independent until the collapse of the Soviet Union in December 1991.

But like most of the 15 former Soviet republics, it declared its sovereignty immediately after the failed hard-line coup against reformist Soviet President Mikhail Gorbachev.

On Aug. 24, 1991, the Ukrainian parliament adopted the Act of Declaration of Independence of Ukraine, reestablishing the country's independence after more than 70 years of being part of the Soviet Union.

Less than four months later, Boris Yeltsin and leaders of other Soviet republics declared the Soviet Union defunct and Gorbachev stepped down on Dec. 25, 1991.

The 30th anniversary of Ukraine's independence came as the country is locked in a bitter tug-of-war with Russia, which in 2014 annexed Crimea and has since been backing a separatist insurgency in eastern Ukraine.

Thousands of people flocked to the central Maidan square, which over the past 30 years has been a rallying point for Ukrainians. The popular uprising of 2013-2014, which ousted pro-Russia President Viktor Yanukovych and triggered the years-long confrontation with Moscow, started on Maidan square.

Delegations from 46 countries and blocs, including 14 presidents, attended the parade in Kyiv.

The day before, they took part in the Crimean Platform summit called by Ukraine to build up pressure on Russia over the 2014 annexation of Crimea that has been denounced as illegal by most of the world.