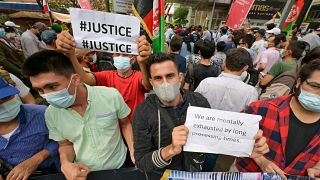 Hundreds of Afghan refugees living in Indonesia held a rally condemning the Taliban's takeover of their country and calling for resettlement in third countries.

The protestors were mostly members of the Hazara ethnic minority.

Indonesia is not a signatory to the U.N. Refugee Convention of 1951 and its 1967 Protocol, and the government doesn't allow asylum seekers to work or have access to schools and public hospitals.

The protestors gathered outside the U.N. refugee agency's office in Jakarta, with many saying they're extremely worried about their families back home.

Most Hazaras are Shiite Muslims, despised by Sunni Muslim radicals and discriminated against by many in the Sunni majority country.

The protestors dispersed after a few hours, as police threatened to arrest them for violating a health state of emergency in Jakarta, which has been hit hard by the coronavirus.

Afghans accounted for a little more than half the 13,400 refugees in Indonesia, according to U.N. figures from April.