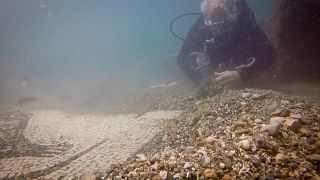 Diving among ancient ruins where Romans used to party

Fish dart across mosaic floors and into the ruined villas, where holidaying Romans once drank, plotted and flirted in the party town of Baiae, now an underwater archaeological park near Naples. Rome's nobility were first attracted in the 2nd century BC to the hot springs at Baiae, which sits on the coast within the Campi Flegrei -- a supervolcano known in English as the Phlegraean Fields. But by the 4th century, the porticos, marble columns, shrines and ornamental fish ponds had begun to sink due to bradyseism, the gradual rise and fall of land due to hydrothermal and seismic activity.