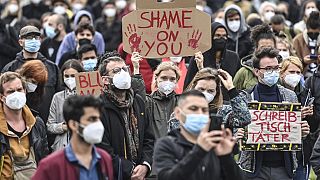 Thousands of people gather in front of the German parliament in Berlin to demand an airlift and the welcome of Afghan refugees by the EU.

Dozens of demonstrators staged a rally outside the U.N.'s Geneva compound on Tuesday to call for respect for women and freedom of expression in Afghanistan after Taliban fighters seized power from the country's government.

The demonstrators called for continued schooling for women and girls – which was banned during the Taliban's previous rule in the late 1990s – and held up banners reading "We want peace" and "Make the Afghan people count!"

Several demonstrators draped themselves in the red, green and black Afghan flags, which has been removed from official buildings and replaced by a white Taliban flag on some official buildings in Afghanistan after the rebel fighters drove out President Ashraf Ghani's government.

The protest took place at the foot of the landmark three-legged chair outside the U.N. Geneva compound, a site that regularly hosts demonstrations about a vast array of grievances and human rights concerns.