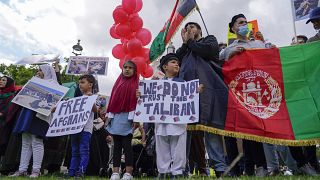 Former Afghan interpreters for the British army protest in Parliament Square in London following the withdrawal of Western forces from Afghanistan and the resumption of power by the Taliban in Kabul.

Britain on August 17 announced a resettlement scheme for Afghans fleeing the Taliban after their return to power, offering an initial 5,000 places in the first year, rising to up to 20,000 in the long term.

The announcement came on the eve of an extraordinary session of parliament on August 18, where MPs recalled from holiday will discuss the collapse of the Afghan government, so soon after the withdrawal of Western forces.

The anti-war group 'Stop the War' also staged a demonstration outside the British Parliament on Wednesday, saying Britain should not leave the Afghan people alone.

The group added that refugees should be welcomed in the UK.

Former opposition leader Jeremy Corbyn joined the demonstration along with other Labour MPs such as Richard Burgon, Zarah Sultana and Dawn Butler.