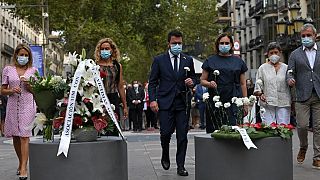 A melancholy cello was the soundtrack to sorrow in Barcelona on Tuesday as families and friends remembered those who lost their lives during a terror attack in 2017.

Four years ago, a van driven by a member of a jihadist cell plowed through pedestrians along Las Ramblas, a packed promenade in Barcelona, killing 13 people and injuring 120. A 14th victim died later from injuries.

In his escape, the 22-year-old Moroccan driver murdered another person to steal their car before leaving the area on foot.

Hours later, five other members of the jihadist cell carried out a second attack 100 kilometres away at the nearby coastal town of Cambrils, knocking down several pedestrians and stabbing a woman to death.

Six perpetrators were later shot dead by police in a vineyard near Barcelona a few days later and two further members died when a bomb workshop exploded.