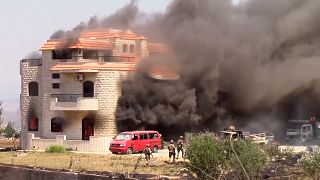 The large group gathered and threw missiles at the house, which caught fire and had black smoke pouring from its windows, before security forces attended to control the situation.

The blast at the warehouse where fuel was illegally stored killed 20 people and injured dozens more in the latest tragedy to hit the Mediterranean country in the throes of a devastating economic and political crisis.

A Lebanese military official said the explosion occurred after the army confiscated a warehouse in Tleil where about 60,000 litres of gasoline were stored and the order was given to distribute the fuel to residents of the area.

Residents had gathered to acquire the scarce commodity, available only on the black market at exorbitant prices or not at all.

It was not clear what caused the explosion, the official told The Associated Press.

He spoke on condition of anonymity in line with regulations.

The explosion comes as Lebanon faces a severe fuel shortage that has been blamed on smuggling, hoarding and the cash-strapped government's inability to secure deliveries of imported fuel.

The shortages have paralysed the country long dependent on private generators to light up their homes.