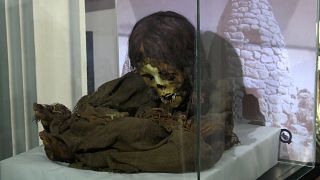 The Inca girl is believed to live among the Pacajes Aymara Indigenous between 1100 and 1450 A.D. Her remains were named "Saphi," an Aymara word for "roots."

The remains were extracted from Bolivia in 1980 by a U.S. diplomat's family and then donated to the Museum of the Michigan State University.

In 2019, the mummy then known as "Ñusta," "princess" in Quechua, was returned to Bolivia.

President Luis Arce held the ceremony in which an Indigenous priest lent him a smoking cauldron to perfume the container for "Saphi," which was then taken back to the collection of La Paz' Bolivian National Museum of Archaeology.