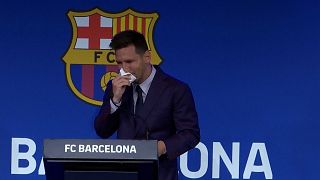 Lionel Messi fought back tears on Sunday 8 August as he began a press conference at which he was expected to confirm he is leaving Barcelona, where he has played his entire career.

The 34-year-old Argentinian superstar, six times a Ballon d'Or winner, has been out of contract since the end of June and Barca say they cannot afford to keep him, with Paris Saint-Germain widely expected to try to entice him to the Parc des Princes