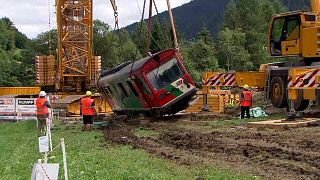 At the beginning of July, the train crashed into the rootstock of a fallen tree and derailed. 17 passengers were injured at the time, nine of whom were taken to hospitals. Three were seriously injured.

A total of 56 people were in the carriage, including many schoolchildren and young people. They were on their way to report card distributions at their schools in Tamsweg. Of the nine people taken to hospital, three were seriously injured and six slightly injured.

The recovery was spectacular and attracted many onlookers. For two weeks, a dedicated platform has been heaped up for the 450-ton salvage crane. During the most dangerous part of the salvage operation, the chains that divers have attached to the wagon are tightened and the 32-ton railcar is lifted out of the Mur River by the salvage crane. The wagon of the Murtalbahn has been lifted 70 meters suspended at a height of 10 meters onto the embankment next to the state road. This part of the rescue also went off without a hitch.