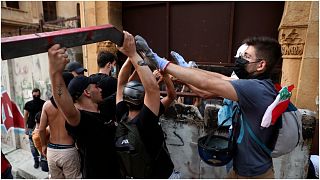 Groups of protesters hurled stones and clashed with security forces near the Lebanese Parliament in Beirut on Wednesday, a year to the day since the devastating blast at the city's port.

Demonstrators accuse Parliament members of blocking the investigation into the explosion by refusing to lift immunity of senior politicians implicated in negligence which led to it.

"The only solution is to lift the immunity of the idiots here or someone wakes up and starts changing from inside. It has been two years since the revolution began and nothing changed," protester Munther Tabbara said.

The grim anniversary came amid an unprecedented economic and financial meltdown, and a political stalemate that has kept the country without a functioning government for a full year.

The explosion killed at least 214 people, according to official records, injured and maimed thousands and devastated entire neighbourhoods of the Lebanese capital.

It was one of the largest non-nuclear explosions in history - the result of hundreds of tons of ammonium nitrate igniting after a fire broke out.

It soon emerged in documents that the highly combustible nitrates had been haphazardly stored at a port warehouse alongside other flammable material since 2014, and that multiple high-level officials over the years knew of its presence and did nothing.

A year later, there has been no accountability, and the investigation has yet to answer questions such as who ordered the shipment of the chemicals and why officials ignored repeated internal warnings of their danger.