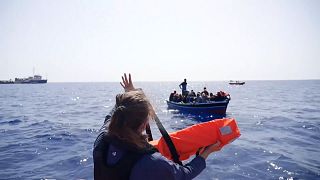 Another 26 people were rescued from a sinking boat on the Mediterranean Sea on Monday, following a weekend of operations in what is the busiest period for migrant crossing.

On Monday, German charity Sea Watch shared a series of images of its personnel distributing life jackets and helping migrants off a boat in distress.

It said it saved 12 people on Sunday and another 26 on Monday.

Charity ships combined efforts to rescue nearly 450 migrants from a wooden boat taking on water in the Mediterranean Sea over the weekend.

French humanitarian group SOS Mediterranee tweeted on Sunday that its rescue vessel Ocean Viking, along with Sea-Watch 3, a ship operated by the German charity, as well as another German humanitarian boat Resqship, had worked together in a five-hour long rescue attempt.

The charity groups were awaiting permission to dock at some southern European port to disembark their passengers.