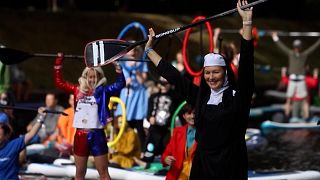 Thousands of Russians dressed up and paddled their way through waterways of St Petersburg on Saturday as the city hosted its annual Stand Up Paddleboarding (SUP) festival.

The 'Fontanka-SUP' festival sees participants dress in a variety of colourful costumes, from fairytale characters to super heroes, before hopping on paddleboards and rowing through the canals and rivers to explore the city.

However due to the ongoing conronavirus pandemic this year's festivities were limited with only a certain amount of people allowed to take part to avoid overcrowding.

Those taking part also had to be vaccinated, test negative, or show proof of recovery from the disease.