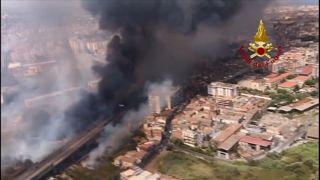 The Italian island of Sicily has been hit by large fires, fuelled by record heat and forcing homes to be evacuated and an airport to close.

Smoke was seen rising above the city of Catania on Friday which has been particularly hard hit by the fires.

A huge blaze broke out on the outskirts of the city and several families were forced to abandon their homes.

According to the Ansa news agency, 150 people were trapped by the fires in two seaside areas of Catania.

In order to escape the flames, they went to the beach where they were rescued by the coast guard, first in rubber dinghies and then transferred to patrol boats.

Firefighters have carried out about 250 interventions in the last 24 hours on the island and operations are still underway to battle the flames with the help of helicopters and planes.