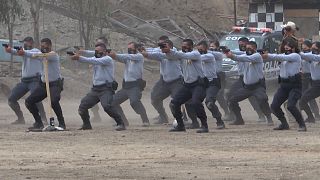 Police performs drills in case of attack to foreign delegations ahead of the bicentennial of the Independence of Peru and President-elect Pedro Castillo's swearing-in ceremony.

Some 10,000 police officers, ten drones and five helicopters will be deployed in Lima to guarantee security on Wednesday during the swearing-in ceremony of Peru's new president, Pedro Castillo, the institution said on Monday.

Three days of ceremonies are planned for the swearing-in of Castillo, who will take office on the day Peru commemorates the bicentenary of independence, declared on 28 July 1821 by Argentine General Jose de San Martin.

More than 2,000 police will be dedicated to protecting foreign dignitaries, including King Felipe VI of Spain and half a dozen Latin American presidents.