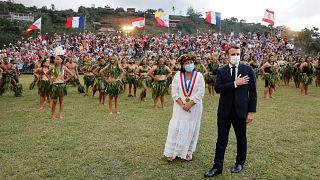 French President Emmanuel Macron visited Hiva Oa in the Marquises Islands on Monday as part of a trip to French Polynesia.

Macron walked alongside Hiva Oa mayor Joelle Frebault as he attended a welcoming ceremony on the second-largest of the Marquises Islands.

Speaking during the ceremony, which saw performances from traditional dancers, Macron said he would fight to help the archipelago gain world heritage status.

His four-day visit comes amid concerns about the impact of climate change on the Pacific island territory, the legacy of French nuclear testing on its atolls, as well as growing Chinese dominance in the region.