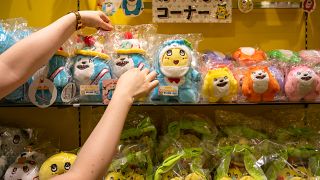 Tokyo 2020's cutesy Olympic mascots are plastered across the host city, but they have competition in mascot-mad Japan, where cuddly characters promote everything from prisons to health screenings.

In the land of Hello Kitty and Pokemon, adorable creatures give a friendly face to private businesses and public institutions alike, and the most successful have full-on celebrity status.

Mascots are so big in Japan that Choko Ohira, 62, runs a school in Tokyo training people to perform as the cuddly characters.

"(Mascots) have the power to draw people in," said Ohira, who has run the school for 17 years.

"Children come with smiles on their faces. They hold hands and hug (the characters)," added Ohira, who spent years performing as a famous mouse on a children's show on public broadcaster NHK.

And the improbable performers give people a chance to let loose in a sometimes rigid society.

"With mascots, you can do things you wouldn't (with other people) in Japan," Ohira said.

Her students, dressed casually, first practise the exaggerated waves and steps commonly used by mascots, before climbing into full-size panda, cat and chipmunk outfits to test their new skills.