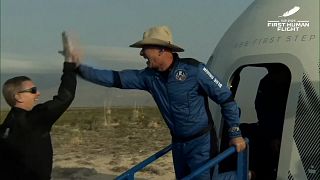 He's the second billionaire in just over a week to ride his own spacecraft.

The Amazon founder soared to space with a hand-picked group in his Blue Origin capsule.

The passengers include Bezos' younger brother, an 18-year-old from the Netherlands and an 82-year-old aviation pioneer from the Dallas area.

They're the youngest and oldest to ever hurtle off the planet.

Named after America's first astronaut, the New Shepard rocket soared from West Texas on the 52nd anniversary of the Apollo 11 moon landing.

The crew landed after the up-and-down flight expected to last just 10 minutes.

They were greeted by cheering family and friends upon return.