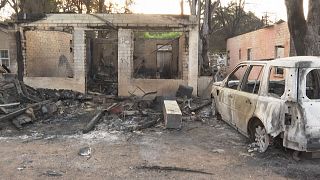 Beverly Houdyshell returned to her home this week in a small Northern California town to find nothing but ashes and debris.

The 79-year-old was among thousands of people evacuated from a wildfire burning along the Nevada border but she and other residents of Doyle, a mountain community of about 600 people, were allowed to come back since the fire has already burned through that area.

Firefighters are making progress on the Beckwourth Complex, a combined pair of blazes that have blackened more than 145 square miles (375 square kilometres) near the Nevada state line.

Dozens of structures burned throughout Doyle, including several houses. Houdyshell is now staying with her granddaughter who also lives in Doyle.

Firefighters have contained about a quarter of the blaze but still expect extreme fire activity throughout the week.

Wildfires that have torched homes and forced thousands to evacuate are burning across 10 parched Western states. Nearly 60 large, active wildfires are burning from Alaska to Wyoming.

The largest fire in the U.S. is the Bootleg Fire in Oregon. It remains out of control after burning an area more than twice the size of Portland and disrupting power transmission lines to California.

The fires erupted as the West was in the grip of the second bout of dangerously high temperatures in just a few weeks. Scientists say a climate change-fueled megadrought also is contributing to conditions that make fires even more dangerous.