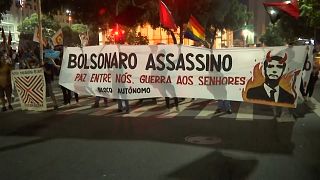 Thousands of demonstrators marched in Rio de Janeiro Tuesday, demanding President Jair Bolsonaro resign over corruption charges and what they say is the mishandling of the COVID-19 pandemic.

In Rio, small clashes broke out between police and some demonstrators, leading to tear-gas being fired to disperse the crowd.

Bolsonaro is under increasing pressure from sagging poll numbers and an aggressive Senate investigation over corruption charges related to the purchase of vaccines.

Many in the crowd say the president is to blame for more than 530,000 Brazilian deaths registered since the pandemic swept the country last year.

Activists waving Cuban and Communist Party flags marched through downtown Rio, and clashed with police when a small group broke away to spray anti-government graffiti on the walls of City Hall, prompting police to move on horseback and on foot to confront the group.

One protester was taken into custody as demonstrators fled the area under a cloud of tear gas and rubber bullets, ending the attempt at vandalizing the government building.

The pace of demonstrations around the country has picked up as hearings in the Senate continue to shed light on the government's response to the pandemic, with accusations of incompetence and corruption putting pressure on the Bolsonaro.