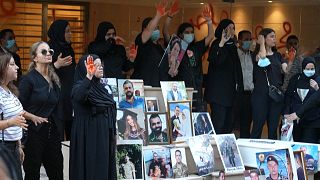 Angered by the lack of progress in investigating the cause of the massive Beirut port explosion, dozens of relatives of victims gathered late on Tuesday afternoon outside the home of caretaker Lebanese Interior Minister Mohamed Fehmi.

Some tossed wooden coffins to symbolise the victims into the grounds of his residence.

They then tried to storm Fehmi's home and scuffled with riot police who beat them with clubs.

The crowd was able to break down two metal gates leading to the building and at least two men suffered minor head wounds.

More than a dozen women dressed in black sneaked into the yard where they carried posters of their loved ones.

Another sprayed the entrance in red with the word "killer," as men pelted the building with tomatoes.

Family members are angry with Fehmi because he rejected a request by the judge investigating the explosion to question Maj. Gen. Abbas Ibrahim, who is one of Lebanon's most prominent generals and heads of the General Security Directorate.