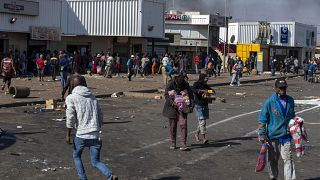 South African police said on Monday shops and businesses have been looted and vandalised during rioting that broke out following the imprisonment of South Africa's former President, Jacob Zuma.

Six people have been killed and 219 arrested so far.

At Jabulani Mall in Soweto, a township of the city of Johannesburg, hundreds of people were seen carrying away goods from shops while outnumbered police watched on.

They fired rubber bullets in an attempt to disperse the crowd.

The rioting by Zuma’s supporters started in his home region of KwaZulu-Natal province last week and over the weekend it spread to Gauteng province, which includes Johannesburg, South Africa’s largest city.