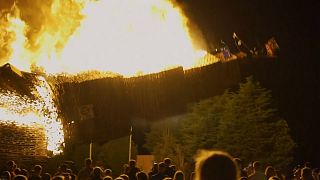 In Portadown, the loyalist community built a 64-metre-high structure from thousands of wooden pallets.

Just before midnight the torches were lit and the pyre was set alight. Soon it came crashing down amidst intense fire and heat, while a few thousand onlookers cheered.

The fire brigade arrived and hosed down nearby houses to cool them down.

The tradition goes back to the 17th century and is a commemoration of the victory of Protestant King Willem III of Orange over Catholic King James II. Back then, the bonfires were lit to guide the ships of King William.