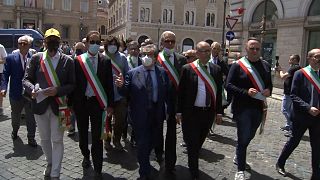 With the hashtag "#dignityformayors" mayors from all over Italy gathered in Rome in Piazza Santi Apostoli to protest. All wearing the tricolor sash, asking for more respect for the first citizens of every city and town.

Mayors have complained about too many judicial inquiries, low salaries and are asking for clear rules on NRP funds allocated to municipalities. "We ask respect for the role and the work of the mayor: we do not accept to always be the first to be investigated for manslaughter for lack of road maintenance or for the flooding of an underpass." From the stage, Mr. Decaro, the Mayor of Bari , waved around a pen as "the weapon of the crime", with which every day mayors sign hundreds of decress, aware that each one of those decrees can sadly 'turn into a judicial investigation against us