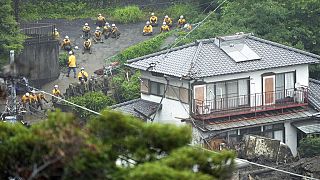 Devastation in Japanese town after landslide sweeps away homes

Two bodies were found after a huge landslide at a resort town in central Japan swept away homes on Saturday following days of heavy rain, with around 20 people still missing, officials said.

Television footage showed a torrent of mud obliterating buildings as it crashed down a hillside in Atami, southwest of Tokyo, sending people fleeing as it buried part of a road.

"I heard a horrible sound and saw a mudslide flowing downwards as rescue workers were urging people to evacuate. So I ran to higher ground," the head of a temple near the disaster told public broadcaster NHK.

Atami saw rainfall of 313 millimetres in just 48 hours to Saturday -- higher than the average monthly total for July of 242.5 millimetres, according to NHK.

He said "around 20" people were still missing after being swept away by the landslide.