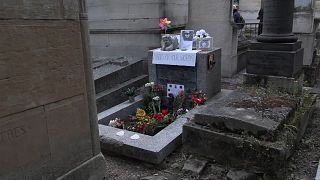 Jim Morrison in Paris on the 50th anniversary of his death

About 50 fans gathered at the grave of Jim Morrison in Paris on the morning of 50th anniversary of his death. Hundreds more were expected Saturday afternoon.

Jim Morrison fan Colleen Amblard drove 7 hours from her hometown of Domancy in the French Alps. The 21-year-old student and amateur photographer was moved to be by the grave that morning.

On 3 July 1971, The Doors frontman Jim Morrison was found dead in a Paris bathtub by his girlfriend Pamela Courson. He was 27 years old. Morrison had arrived in Paris three and a half months earlier.

He had recently completed The Doors' sixth studio album "L.A. Woman" and was appealing a profanity and indecent exposure conviction which carried a six-month jail sentence.

The lengthy trial had taken a toll on the American rock star, whose alcohol intake was legendary, and it was a chubby, full-bearded Morrison who landed in the French capital in March 1971.

On the morning of July 3rd, first responders found him dead in his apartment's bathtub. When the police arrived, his girlfriend Pamela Courson told them he had been having severe coughing fits that night and started coughing up blood and vomiting at some point. According to Courson, Morrison decided to take a bath and told her to go back to bed.

Upon examining the body, a doctor concluded that Morrison had likely suffered a "myocardial infarction which led to cardiac arrest."

No autopsy was performed and when the Doors manager Bill Siddons arrived in Paris a day later, Jim had been placed into a coffin which was already sealed.

This led many people to alternative theories, including one placing the death of Morrison in a nightclub bathroom where he allegedly overdosed on heroin that was too pure.

The lack of physical evidence and the fact that most people who saw Morrison that fateful night are dead continue to fuel the mystery fifty years on.