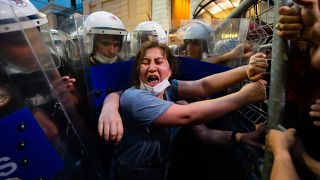 Hundreds of women demonstrated in Istanbul on the day that Turkey formally withdrew from a landmark international treaty protecting women from violence.

Police closed off the area but later briefly removed barricades to allow a short march.

President Recep Tayyip Erdogan has insisted that the withdrawal from the agreement - known as the Istanbul Convention - won't be a step backwards for women.

But the demonstrators made clear they disagree and insisted they wanted Turkey to rejoin the treaty. "It's not over for us," one banner read.

Similar protests were held in other Turkish cities.

Erdogan ended the country's participation in the convention with a surprise decree in March, prompting condemnation from women's rights groups and Western countries.

A court appeal to stop the withdrawal was rejected this week.

Erdogan announced his alternative Action Plan for Combating Violence against Women” on Thursday, which includes goals such as reviewing judicial processes, improving protection services and gathering data on violence.