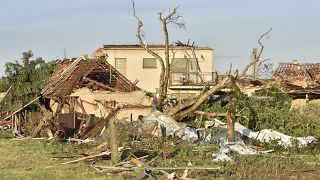 Seven towns and villages have been badly damaged, with entire buildings turned into ruins and cars overturned.

Over 120,000 households were without electricity.

Some 360 extra police officers were sent to the area, together with the military.

The rescuers from many parts of the country who came to help were joined by their counterparts from nearby Austria and Slovakia.

They were using drones and helicopters to search the rubble.