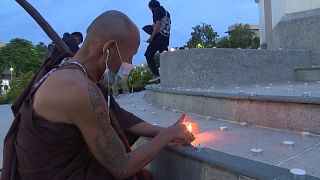 Protesters stage a candlelight vigil to commemorate the 89th anniversary of the Siamese Revolution, an uprising that transformed Thailand from absolutism to a constitutional monarchy.

Thailand has seen a near-daily anti-government protest last year, calling for the prime minister to resign, a rewrite of the constitution, and a reform of the monarchy - a topic considered a grave taboo in Thai society.