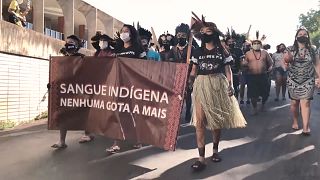 Hundreds of Indigenous people gathered outside Brazil's Congress on Wednesday to push for rejection of a bill that could loosen protections for their lands — a proposal that has already prompted clashes with police.

Indigenous groups have been staging protests for days in the capital.

Dressed in traditional clothes and carrying bows, they marched to Congress, where they sang and danced.

The bill before the lower house's Constitution and Justice Committee would require Indigenous people seeking full protection of their territories to have been occupying the land in 1988, the year Brazil's constitution was signed after the nation's return to democracy.

The committee approved the bill late Wednesday, paving the way for it to proceed to the floor for a vote.

Indigenous rights activists say the cut-off date ignores the fact many had been forcibly expelled from their ancestral lands, particularly during the military dictatorship, or may not have formal means to prove possession.

The bill also would allow the government to appropriate so-called Indigenous reserves demarcated prior to 1988 if the groups' cultural features have changed.

That could potentially apply to more than 60 areas totaling roughly 400,000 hectares (about 1,500 square miles), which are home to around 70,000 people, according to the institute.

Indigenous demonstrators circled around a giant speaker to listen to the congressional committee's proceedings.