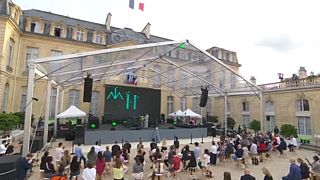 Every June 21st since 1982, the 'Fête de la Musique' (National Music day) has become an important meeting point between the French people and artists.

Over time, it has become a part of French culture and France's international influence.

This year's edition, the 40th since its creation, has become even more important, as it symbolises the return of happy days after long and difficult months, especially for thousands of artists who were keen to get back on stage.

They performed alongside talented artists from the younger generation such as NSDOS, Irène Dresel or Crystal Murray.

Contrary to previous editions which welcomed several thousands, the health crisis meant only a limited number of people were allowed inside the Elysée.

Invitations were sent to around a hundred teenagers as well as to local shopkeepers affected by the Health crisis and the Yellow Vests movements.