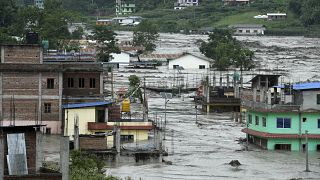 The annual monsoon rains in the Himalayan nation revitalises farms and waterways but also triggers deadly landslides and floods.

Officials said a landslide caused by the monsoon deluge blocked a river, which then burst and sent a flood of water downstream, inundating a settlement in Sindhupalchowk district near the capital Kathmandu.

"One body has been recovered and seven others are missing from different places in the flood," district official Baburam Khanal told AFP.

"None of the residents has slept tonight, we haven't slept at all looking at this terrifying situation," resident Sailesh Khadka said.

The number of deadly floods and landslides has increased in recent years in Nepal. Experts say climate change and more road construction could be triggering deadly disasters.

More than 200 people were killed in landslides and floods in Nepal during last year's monsoon season.

Abortion rights defenders gather outside US Supreme Court and in New York.